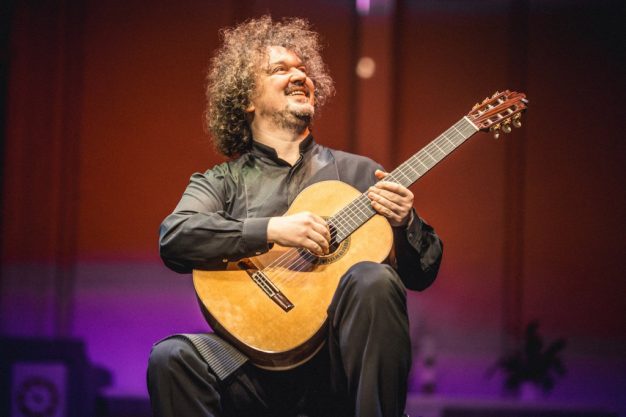 is one of the most distinguished classical guitarists of our time. His concert performances, both as a
soloist or with an orchestra, leave long-lasting impressions on both audiences and critics.
He graduated from the Music Academy of Zagreb with Darko Petrinjak and completed his studies
with Hubert Käppel at the Hochschule für Musik in Cologne.
In his “tour de force” competition years (1990-1997) Zoran Dukic has won an astonishing number
of competitions. He is the only guitarist to have won both “Andrés Segovia” competitions, in
Granada and in Palma de Mallorca. Showing astounding mastery in a wide variety of musical
periods and styles he has also won competitions dedicated to “Fernando Sor”, “Manuel Ponce”,
“Manuel de Falla”, “Francisco Tárrega” among others. In the greatest Spanish guitar competition in
Madrid, patronized by the Royal Family, he was awarded, in addition to the first prize, the special
prize for the best interpretation of Spanish music (first time awarded to a non-Spaniard).
Though he considers the music by J. S. Bach is still the focal point of his musical life, he has
inspired numerous composers to dedicate their works to him. His premiers of new music are
strengthened by his admiration of contemporary musical expression. His programs include new
works by Takemitsu, Henze, Reily, Carter or Gubaidulina among many others.
He enjoys a special affinity for Spanish and South American musical idiom, the core repertoire of
classical guitar. Currently, his carefully balanced programs present a range of music from Bach to
Britten, from Sor to Albéniz, from Tárrega to Villa-Lobos and Brouwer.